I believe in grabbing an opportunity when it arrives at my doorstep and exploring it with all my might.
Himachal Pradesh,Sikkim,Darjeeling,Calcutta,Chennai,Pondicherry,Kerala,Bangalore,Goa and Gujurat had been chalked on my travel map already.Then came Delhi,totally unannounced and I couldn’t contain my thrill.It was a work trip but time management and the willingness to explore new destinations gave me a handful of the ‘Dilli experience’.I make it a point to travel to at least 2 destinations in a year be it within the state,country or an international trip.
Travelling indeed expands your horizons.There is a difference in the way people behave,dress,eat,talk at every station for that matter.Ever wondered why the best south indian joints are concentrated in Matunga central? Why is there such a vast difference between the ‘townies'(Dadar-Churchgate) and the ‘burbs'(Mahim-Virar)? while you ponder over that,let me take you through Delhi.
The journey
I knew I was going to be on a roll right from the moment I stepped into the airport.I was standing at the baggage check in ,when my colleague Rohit spotted Sonam Kapoor with her sister Rhea Kapoor saying ‘Oh only She would wear something like that’.I jumped when he pointed towards her and I ran to tell her I’m a fan of the way she dresses because admit it fashionistas, you would’ve done the same.I also managed to get a picture!(fangirlmoment).

I finally hopped onto the plane and landed in Delhi.We traveled in the team bus from the Delhi airport to Janpath marg,which is where our hotel was.I’d recommend booking an Ola or an Uber which are the safest to avoid the local rickshaws that simply don’t follow a meter system!
Sightseeing & shopping
I stayed at le meridien located at Janpath marg which was unbelievably fancy.My first stop was Connaught place which was similar to the Colaba of Mumbai.The streets on that Friday night were buzzing with youngsters  checking into cafes & bars that were lined up one after another.Me and my colleagues visited the warehouse cafe and got lucky to witness one of the most entertaining musicians who performed original compositions in punjabi and bollywood songs from the 90’s! the ambience added to the beauty of the evening.I could keep walking the streets of Connaught place forever! the weather was airy,the people were merry.
My second stop was Janpath market.It was at a walkable distance from my hotel but I took a rickshaw anyway because I was running out of time :p.Janpath marg was filled with Indian jewellery ,accessories and memoirs right from tibetan  to punjabi.This market was a one point stop for handmade bags,home decor ,rajasthani kurthas!you can bargain for everything here just like you do on the streets of hill road and Colaba causeway.I made a few purchases like statement neckpieces,Jhumkas,kurthas which I could go on buying if only time permitted.I found a little shop that branded Punjab.That shop was the most colourful one on that street just like the state.My next stop was Palika bazaar.This market was not worth my time but just okay to explore.I’d compare it to the CST subway in Mumbai.

Next stop was India gate and guess what it rained there! I experienced my first rains in March in Delhi.I wondered if this trip could get even crazier.I tried the famous gol gappa which was average but worth a try.
On day 3 which was sadly my last day in Delhi,I dragged my colleages to the famous Jantar Mantar which took us 30 minutes to explore,complete with our picture sessions.Do not miss a picture against the inverted heart.The beauty of this place is the thought put into the structure which tells the time.

We had exactly 1 hour to complete our Dilli darshan and so  we headed to Feroz Shah kotla palace bang opposite Indira Gandhi indoor stadium.This place had it’s own austere charm.I love forts,palaces ,churches and temples,basically anything that narrates the history of the place.Right outside the fort was a kulcha and paratha cart.I rushed to try my firt Dilli street food breakfast.Kulcha is this flat bread which is a typical Amritsari dish that I ate with spicy chickpea curry.Their preparations are out of this world.I relished every hot bite of my Kulcha with the yummy chickpea curry and crave it till today.

With that I ended my shortlived Delhi trip but explored it to the fullest despite my crazy schedule.Delhi is very different in terms of the culture.The people there are more Indianised,speak in a haryanvi hindi accent and love food.Contrary to the stereotypes I had about the men in mind,my experience was safe .The roads are better organized, broader and well designated which makes it easier to travel by yourself without getting lost.Overall I fell in love with the capital of India because of the monuments it is filled with. 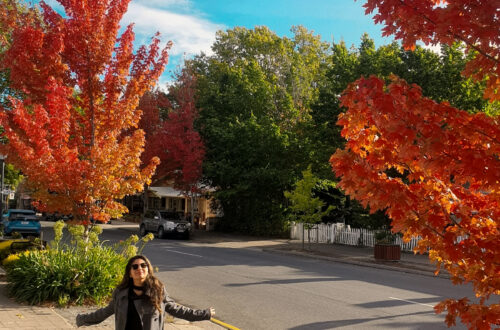